Disabled And Here: Interview with Leila

Hi Leila! How would you like to introduce yourself? I’m an artist, activist, and organizer living in the Pacific Northwest. I can be found crashing nonprofit fundraisers for free food and generally making folks uncomfortable in the name of liberation whenever I can. 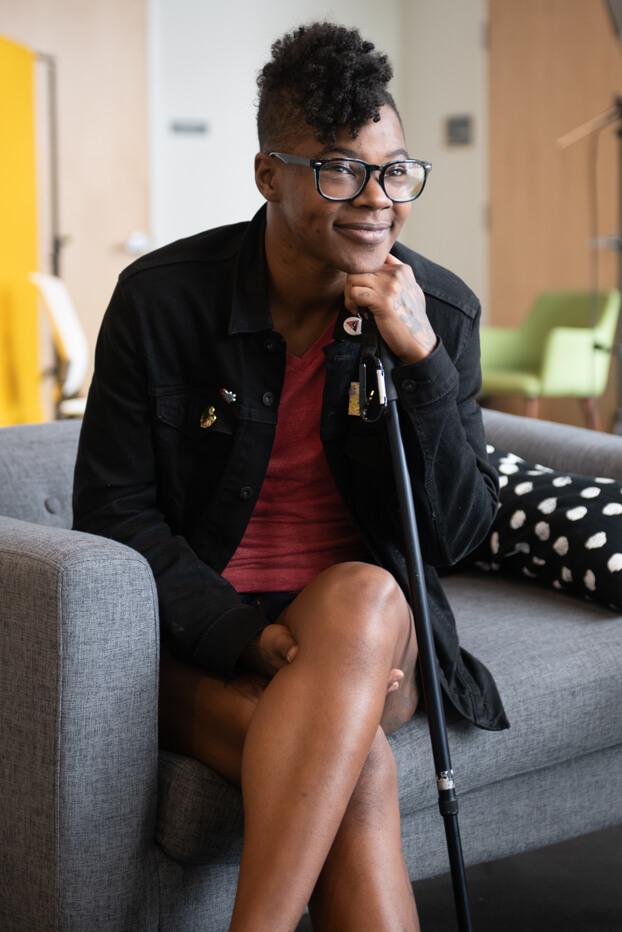 Leila smiles while sitting on a couch and resting their chin against their cane.

What have been some of your favorite projects to work on? My fave projects are always collaborations; I love coming together with other artists to realize something bigger than ourselves.

Other cool projects to check out:

Even though BIPOC have had long histories with art and tattooing, galleries and studios have been typically white-dominated. What has your experience been like in these spaces? The problem of white supremacy in creative spaces was the impetus for Maya Vivas and I founding Ori Gallery; we were tired of fighting to get in the door only to fight for scraps in spaces that were not built to hold the complexity of out work to begin with. We wanted to create something that broke the cycle of trauma for artists of color and provided a clear pathway for folks to explore their practice free from the confines of the white gaze.

Learning to tattoo was my main motivator for moving to the Pacific Northwest. I’ve worked out of a private studio in SE Portland for the last 6 years. Developing an independent space where I can serve individual needs has been instrumental to creating an accessible practice. While the tattoo world is changing rapidly, as always, accessibility is often an afterthought and many spaces are not trauma-informed, physically accessible, or accommodating.

Many places still use their inaccessibility as an “edgy” selling point and that’s something I want to actively push against. Because body modification is a pre-colonial art and based in self-reclamation, it is most precious to people whose bodies are under constant scrutiny and policing from multiple oppressive entities on systemic, cultural, and interpersonal levels. 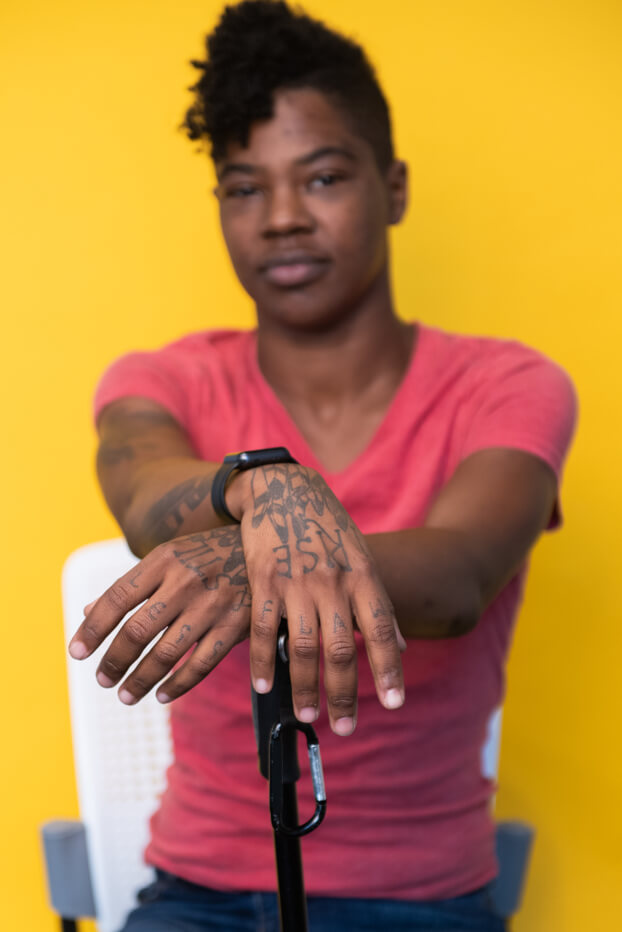 Leila sits with their arms resting on their cane; the focal point on Leila’s hands and tattoos, which include “flawless” spelled out across their knuckles.

You also do a lot of things around the community. Can you tell us more about your organizing and activism? I would say my organizing largely revolves around empowering folks through education and transformative conversational spaces, and organizing resources towards those same folks so that they can pay it forward. I work a lot with young folks, disabled communities, queer folks and communities of color, finding ways to actively push back against oppressive forces.

What are some things you do to relax or recharge? I watch a lot of cartoons and read hella comic books. I like making 1:1 hangout times with folks really close to me and creating intimate community space with folks.

How long have you lived in Portland / the Pacific Northwest? How does it compare to previously being in San Francisco / the Bay Area? I’ve been in Portland since 2004. Originally I moved to the PNW because it was still cheaper than the Bay Area at the time and I love the West Coast for the forest and the ocean. I would say that both cities are experiencing similar effects of gentrification, but you can tell that folks in the Bay are used to at least seeing Black and Brown folks on a regular basis.

Are there things you wish people understood better about disability, chronic illness, or accessibility? I wish more people would realize that anyone can become a part of this community at any time and that ignoring communities you're not comfortable with isn't going to make them go away. 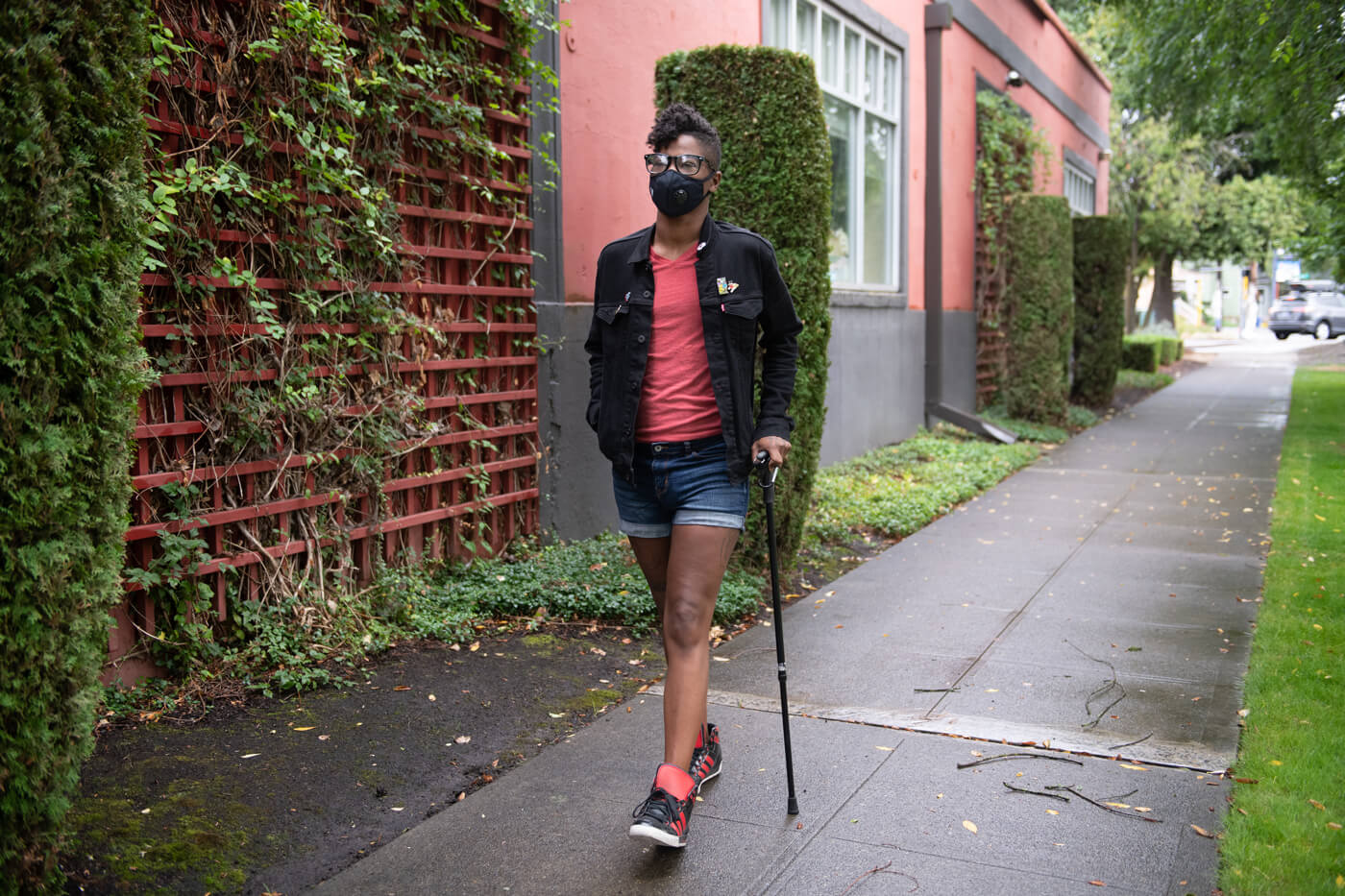 Leila walks down a neighborhood street with lots of greenery while wearing a face mask and holding their cane.

Is there anything you’d like to wrap up with? Every single person has a place in our fight for liberation, don't wait until you feel “ready” cause that day will never come. We need your energy and talent now.

Going forward, what are some ways that people can follow and/or support you? I’m on Instagram as @enbyonce and my Cashtag/Venmo is leilabean.